Congrats to grad student Jenn Houtz, whose fantastic presentation on microbial diversity and flexibility in tree swallows was awarded the best student talk in the Division of Ecoimmunology and Disease Ecology at SICB 2021! 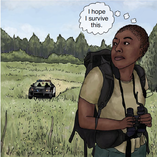 A new paper by Monique Pipkin and Amelia Demery (also an EEB grad student) addresses how researchers of some identities face increased risk while engaging in field work - and what researchers, supervisors, departments, and universities can do to help. A must read for everyone who does or oversees field research!

An analysis led by former graduate student, and current Max Planck postdoc, Ryan Shipley, and published in PNAS, finds a major cost of responding to changing climates: as a result of breeding earlier in the spring tree swallows now face twice as many cold snaps during breeding as they did a few decades ago. Result: lots of nestling mortality!

What can we learn about stress from birds?
July 2020

Have you ever wondered what stresses birds out? Or why we respond to stress in the way we do? Check out this animated video created by Monique Pipkin, Conor Taff, Mya Thompson and Maren Vitousek. It was funded by Maren and Dan's NSF grant - and features Monique's narration debut!

Swallows reared in cold temperatures are more responsive to stress in adulthood
March 2020
​
A new paper in the Journal of Animal Ecology led by grad student Jenny Uehling finds that female tree swallows that were incubated during periods of particularly cold weather mounted a greater hormonal stress response in adulthood, when raising their own young.

A study published in Molecular Ecology that was co-led by Conor Taff and Leo Campagna found that tree swallows with lower levels of methylation at differentially methylated regions across the genome were later more resistant to environmental stressors, and had brighter white breast plumage (a social signal). This effort also included the sequencing and assembly of the tree swallow genome! 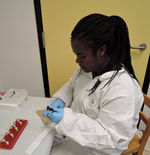 A warm welcome to two incoming lab members: first year PhD student Monique Pipkin (left, hard at work), and new lab manager Brittany Laslow. Both come with a wealth of research experience in different systems. We are very excited to have both Monique and Brittany in the lab! 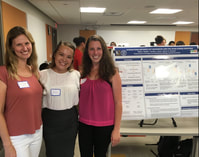 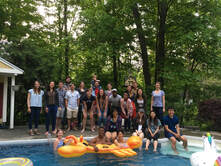 The lab is excited to receive a Director's Fellowship Award from DARPA! This award, part of the Young Faculty program, is supporting research testing the relationships among social interactions and recovery from stress. Experiments are already full swing, with a busy field season underway, and a big team of postdocs, grads, and undergrad researchers - shown here on a rare summer afternoon outside of the field lab!

Conor's paper on sociality, signals, and stress resilience published in Behavioral Ecology
May 2019

A new paper led by Conor found that tree swallows are exceedingly nosy neighbors. Birds of both sexes frequently visit other boxes while raising their own young. The number of visits birds make and receive is predicted by the whiteness of ventral feathers.  Intriguingly, Conor also found that ventral feather brightness is a strong predictor of stress resilience.

Maren was honored to receive the Kendall S. Carpenter Memorial Advising Award from Cornell in May. A big thanks to all of the dedicated grads and postdocs who co-mentor student research, and to all the incredible undergrads who have come through our lab!

Work led by Cedric found that among birds facing both natural and experimental challenges, stress resilience is best predicted by mounting a strong glucocorticoid stress response and rapidly and effectively terminating that response through negative feedback. This was truly a team effort - coauthors include lab members Conor Taff and Tom Ryan, and collaborators Dan Ardia and David Winkler.

An analysis of macroevolutionary patterning in glucocorticoids found that across vertebrates, selection appears to favor the "supportive" role of glucocorticoids in responding effectively to challenges.  In contrast, the predictors of variation in stress-induced glucocorticoids suggests that selection generally favors "protection" from glucocorticoid-induced costs. 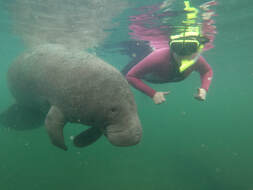 Seven members of the lab traveled to Tampa in January for the Society for Integrative and Comparative Biology annual meeting. Conor, Cedric, Alli and Jenny gave talks on their research, and Tom and Jenn presented posters. Maren also participated in a great symposium on stress across biological levels of organization run by Britt Heidinger and Haruka Wada. After the meeting fun we drove down to Crystal Springs to snorkel with manatees, which I think was on the bucket list for all! It was a cold day, so there were tons of manatees...and they were very friendly. 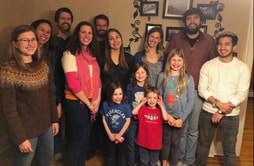 Welcome to many new lab members!

The lab has grown substantially this year. We welcomed three new graduate students: Jenn Houtz and Colleen Miller began the EEB PhD program in the fall, and third-year student David Chang van Oordt transferred into the lab. We are also thrilled to be joined by two new postdocs and Rose Fellows Alli Injaian and Sabrina McNew. Our ranks also now include six junior field assistants/ pipetters-in-training (also known as the lab F1s)

One of our biggest projects came to fruition this week with the release of the HormoneBase dataset! This five-year effort involved a collaboration among a dozen contributing labs - including co-leader Michele Johnson - and countless other participants. Lab members Laura Schoenle and Jenny Uehling were particularly central to our efforts. A number of the resulting analyses are currently in press in a special issue of Integrative and Comparative Biology, with more on the way. We encourage additional data submissions at www.hormonebase.org 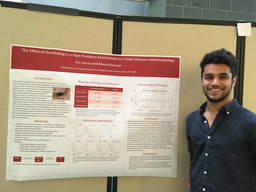 Three lab undergrads presented their research at Cornell's Undergrad Research in Biology fair. Eric Alerte presented on the effect of predator exposure during development on cricket morphology and behavior, Danica Lee presented her work on the tree swallow microbiota, and Alyssa Rodriguez practiced for a successful defense of her honors thesis on the relationships between color and corticosterone levels in tree swallows. Congrats to all! 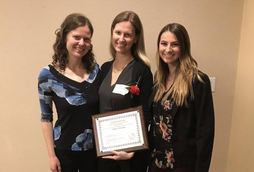 Jocelyn, Maren, and Alyssa attended the CALS awards dinner in April, where Maren received the Faculty Excellence in Undergraduate Research Mentoring Award. The mini lab reunion (and the cheesecake) were excellent. Thanks to all of the wonderful undergrads who have brought so much to the lab - including these two long-time lab members! 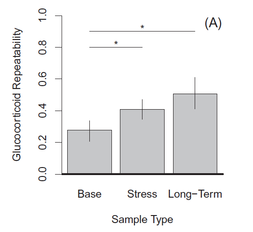 Postdocs Conor Taff and Laura Schoenle published a nice meta-analysis on glucocorticoid repeatability across taxa in General and Comparative Endocrinology. A quick synopsis: despite their high intra-individual variation, baseline and stress-induced glucocorticoids are significantly repeatable, as are fecal and feather samples. Unsurprisingly, repeatability decreases with increased time between sampling events. 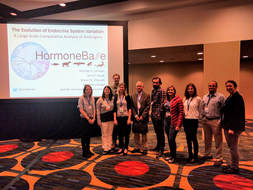 Nine members and friends of the lab traveled to San Francisco in early January to attend the Society for Integrative and Comparative Biology's annual meeting. Everyone presented, including first-time attendees Jenny Uehling and Tom Ryan, and undergrad Alyssa Rodriguez. Maren and Michele Johnson co-organized a symposium entitled "Illuminating endocrine evolution through large-scale comparative analyses", which featured lots of great talks, and an associated mentoring program for students from under-represented backgrounds. We can't wait for next year's meeting! 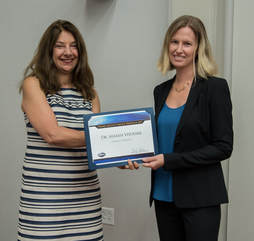 In August Maren traveled to the Defense Advanced Projects Research Agency (DARPA) headquarters in Alexandria, Virginia to accept the award, and to hear more about the exciting and innovative work across many domains that is supported by this program.

Our lab's award will support a large, multiyear study of how social interactions and stressors influence the biology of individuals that experience them. Maren, Conor, and the rest of the team are excited to begin work on this new project! 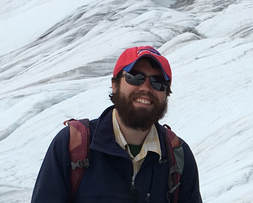 Incoming EEB PhD student Tom arrived a few months early to get a jump start on field work. After a busy few weeks with the Ithaca team he set off for McCarthy, Alaska to begin working with the swallows there - and exploring glaciers in his free time! Tom is interested in the endocrine mediators of parental behavior in birds, and already has extensive field work experience across the Americas and Australia. 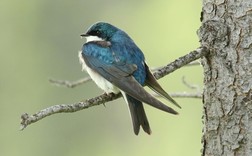 Maren was an awarded an Affinito-Stewart grant to support collaborative work testing the links between environmental stressors and the gut microbiome in free-living birds. 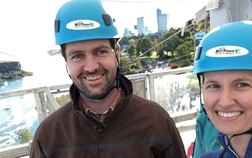 Lab members present stress research at SICB and other meetings

Cedric, Conor, Laura, and Maren flew south in January to attend the Society for Integrative and Comparative Biology annual meeting in New Orleans. Lab members also presented at several other conferences this year, including NAOC in Washington DC, and ISAE in Ontario, Canada - where we took advantage of a free afternoon to go zip-lining down to Niagara Falls!

New paper in Trends in Ecology and Evolution 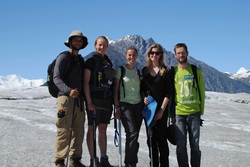 The tree team headed to incredible McCarthy in May to begin the first season of work on comparative stress physiology. The team, headed by postdoc Cedric Zimmer, includes undergrads Alyssa Rodriguez (Cornell), Abby Blackstone (University of Alaska-Fairbanks), and Yosvany Rodriguez (Franklin and Marshall). We were joined by collaborators Alex Rose and Dan Ardia. 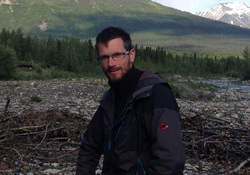 Cedric is a physiologist and behavioral endocrinologist with expertise in how animals respond to stress. He joined the lab this spring, and will be leading research comparing how swallows that breed in very different environments cope with challenges. Before coming to Cornell, Cedric was a postdoc with Karen Spencer at St. Andrews studying the effects of exposure to stressors during development on physiology, behavior, and gene expression. 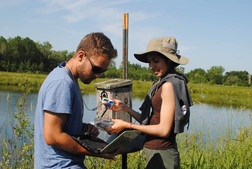 NSF has awarded us funding to put together a three-day workshop on advancing data accessibility in behavioral research in 2016! The proposal, which was led by Mike Webster, also includes Ed Scholes and David Winkler. We are excited to work with this great team, and others in the field, to address strategies for making non-standard data sets relevant for behavioral research - including physiological data - widely accessible. 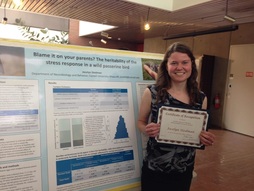 A big congratulations to Jocelyn Stedman, a three-year lab member whose honors thesis won the Cynthia Kagarise Sherman Award for the best undergraduate thesis in behavior from the Neurobiology and Behavior Department! 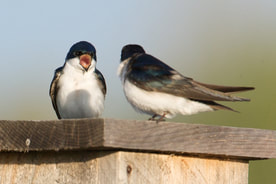 Our lab's proposal to study variation in the stress response has been funded! This research will address why some individuals, and some populations, are better at coping with stress than others. The four-year project - which will involve tree swallows breeding across a range of environments from Alaska to Tennessee - includes collaborations with several research labs, including Co-PI Dan Ardia. 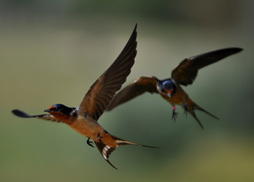 
Our finding that the color of a female's feathers influences her oxidative stress and testosterone levels was featured in Science. This research was done with collaborators Rebecca Safran and Rose Stewart. You can access the feature here, and the full article here.