Individual variation in the response to stressful events 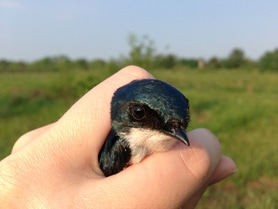 The fundamental components of the physiological stress response are highly conserved in vertebrates, yet remarkable variation exists in the magnitude and duration of the response to stressors, and in the capacity and propensity to generate a response. Current research adressess the causes and evolutionary consequences of this variation within and across populations and species. We are particularly interested in elucidating the role of glucocorticoid hormones in mediating behavioral and physiological processes important for fitness.

Our research integrates a variety of approaches and techniques to address these questions in free-living vertebrates. Field research in tree swallows utilizes a large population of individually-marked birds at Cornell's Experimental Ponds that has been studied by David Winkler for over 30 years, and other populations breeding across North America.
Broad scale patterns in circulating hormones 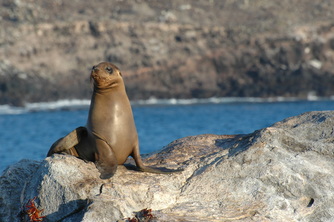 Hormones influence a variety of decisions that organisms make to survive and reproduce. When to begin reproducing? How many offspring to produce? How strongly to respond to competitors or predators? These crucial functions suggest that selection might constrain hormone levels around one or more fitness optima. However, even within populations and life history stages, individuals often vary markedly in hormone levels, and the role of selection in shaping endocrine traits remains unclear. I am currently leading the HormoneBase collaboration, together with Michele Johnson and Jerry Husak, which is addressing these questions with large-scale comparative analyses of aggregated hormone data from free-living vertebrates conducted within a phylogenetic, ecological, and life-history framework.

The costs and evolutionary consequences of sexual signaling and signal assessment
Dynamic links among morphology, physiology, and behavior 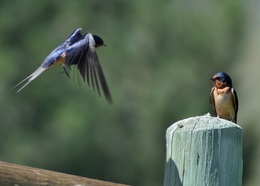 Many species posess elaborate or brightly colored morphological signals that are used to mediate social interactions. The development of signals is often constrained by physiological condition, but signal manipulations have revealed that the appearance of a signal can also influence the physiological state of its bearer. In collaboration with Rebecca Safran I explored this dynamic feedback in a recently diverged subspecies complex (barn swallows: Hirundo rustica)  in which different populations use different signals in mate choice. Current work, in tree swallows, is tasing how signal color influences social interactions, phenotype, and stress resilience, and how signals provide information about their bearer in changing social and ecological contexts.
The energetic cost and endocrine predictors of mate choice 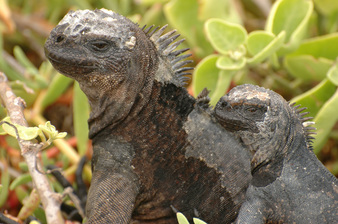 Females of many species spend substantial amounts of time assessing and discriminating among potential mates, but historically, little was known about the energetic cost of these behaviors. Mate choice is often predicted to carry minimal costs, particularly in mating systems in which females do not appear to receive direct benefits from their chosen mate. Using miniaturized heart rate data loggers to generate fine-scale estimates of oxyen consumption in free-living Galapagos marine iguanas, we discovered that females pay high energetic, reproductive, and apparent survival costs to discriminate among potential mates in this lekking system. Individual variation in reproductive investment in female marine iguanas is predicted by circulating hormone levels prior to and during reproduction. Females that mount a weaker glucocorticoid response to stress are more likely to reproduce, and are more selective about potential mates.  Across years, both mate selectivity and circulating hormone levels covary with climate cycles, suggesting that a change in climate could potentially impact the direction or strength of sexual selection.
﻿Photos by Nathan Gregory (marine iguanas, sea lions),  Maren Vitousek (tree swallows), and Matt Wilkins (barn swallows).﻿