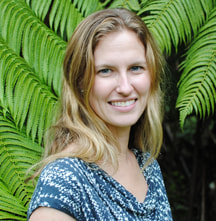 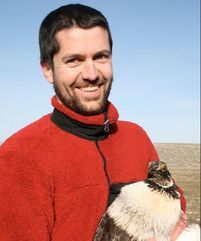 Conor joined the lab as a Cornell Lab of Ornithology Rose Postdoctoral Fellow, and is now supported by a DARPA grant on how social interactions influence stress resilience. Before coming to Cornell, he completed a PhD and USDA-funded postdoctoral research at the University of California, Davis. Conor has been studying wild birds for over 10 years. His work has addressed questions about breeding biology, life history trade-offs, sexual signal evolution, epidemiology, and movement ecology in Common Yellowthroats, Greater Sage-Grouse, and American Crows. Conor's current work, in Tree Swallows, addresses how stress affects behavior and physiology, and how social signals and social interactions affect phenotype and fitness. You can read more about Conor's research here.
Cedric Zimmer 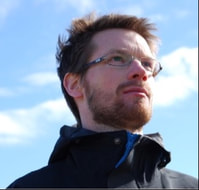 Cedric is a postdoctoral researcher in the lab. Before coming to Cornell he completed a PhD at the University of Strasbourg in France, and a postdoc at the University of St. Andrews in Scotland. Cedric has been working on stress in birds for over a decade. His work addresses how stressors (including predation risk, food availability, and anthropogenic disturbance) affect birds, and the adaptations that enable successful coping. He is especially interested in the effects of developmental stressors exposure on later-life phenotypes. Cedric's work uses an interdisciplinary approach that combines techniques from molecular biology to behavioral ecology. Read more about Cedric's work here. 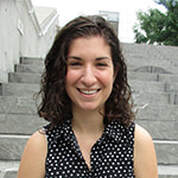 Alli is a postdoctoral associate in EEB and a Rose Fellow at the Lab of Ornithology. She earned a PhD in Animal Behavior from the University of California, Davis and a MS in Ecology and Evolution from the University of Michigan. Alli is generally interested in human impacts on birds. Her doctoral research experimentally tested the effects of traffic noise exposure on habitat use, parental behavior, adult and nestling physiology, reproductive success and telomere dynamics in tree swallows. In the Vitousek Lab, Alli will continue working with tree swallows by experimentally investigation light pollution impacts on adult and nestling physiology and immune responses. She will also investigate anthropogenic noise propagation through complex habitats. To find out more, visit Alli's website here. 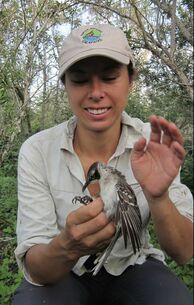 Sabrina is a Rose Postdoctoral Fellow working with the Vitousek and Lovette Labs. She joined the Lab of Ornithology after completing a PhD at the University of Utah. Sabrina’s research interests focus on avian disease ecology and tropical ecology. During her PhD, Sabrina studied the effects of an introduced parasite, Philornis downsi, on Galápagos mockingbirds. Her work integrates field experiments, genomic and epigenomic tools, and immunology to understand how birds defend themselves against parasites and pathogens. In the Vitousek Lab, Sabrina looks forward to developing experiments in a new system and learning more about stress physiology. More information about her research can be found at sabrinamcnew.com 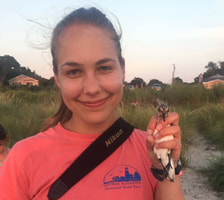 Jenny is a PhD student in Ecology and Evolutionary Biology, and a National Science Foundation Graduate Research Fellow. She came to Cornell from the University of Chicago, where she worked with Steve Pruett-Jones on non-native parrots in the United States and fairy-wrens in South Australia. She is interested in how animals, especially birds, respond to dynamic environmental conditions, via hormonal, behavioral, and movement responses. She is especially interested in these responses during breeding and migration. Jenny works on breeding Tree Swallows in Ithaca, NY, and on migrating Sanderlings stopping over in the Delaware Bay. You can reach her at jju8@cornell.edu. 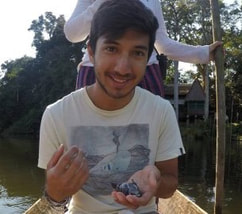 David is a fourth year PhD student in EEB, who is co-advised by Kelly Zamudio. He is interested in how individual variation in the resistance to infectious diseases can affect the ability to survive, reproduce, and migrate, and how it can affect pathogen transmission across the landscape. David is currently studying avian malaria in tree swallows and white-winged swallows. Prior to coming to Cornell David attended the Universidad Peruana Cayetano Heredia in Lima, Peru. He can be reached at: dac385@cornell.edu.
Tom Ryan 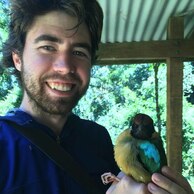 Tom is a graduate student in EEB. He is broadly interested in the behavioral and physiological ecology of birds in the wild, and especially how selection influences hormonal mediation of life history traits associated with breeding in birds. Before he came to Cornell, he served as an assistant on various research projects run by the Smithsonian Migratory Bird Center, Cornell Lab of Ornithology, University of Queensland, and Point Blue Conservation Science. You can contact him by email at: tar87@cornell.edu.
Colleen Miller 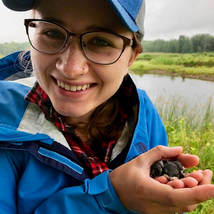 Colleen is a PhD student in Ecology and Evolutionary Biology and a Presidential Life Sciences Fellow. She came to Cornell after working with Dr. Benjamin Zuckerberg on Northern Cardinal biogeography at the University of Wisconsin-Madison, where she completed her master's degree. Colleen is broadly interested in how anthropogenic impacts, specifically urban systems, affect bird populations. She is currently looking at the effects of artificial light at night in two systems: aphids and their predators, and free-living black-capped chickadees. You can contact her at: ccm246@cornell.edu or learn more about her research here. 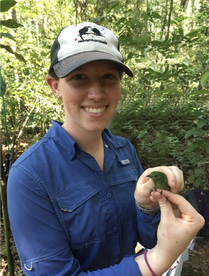 Jenn is a PhD student in Ecology and Evolutionary Biology. She is also a National Science Foundation Graduate Research Fellow, and a Presidential Life Sciences Fellow. Jenn is interested in characterizing the impacts of gut microbiome composition on the stress responsiveness and fitness of hosts. Her research is currently addressing the mechanistic links between the gut microbiome and stress-related changes in physiology, behavior, and brain development in tree swallows. Before coming to Cornell Jenn attended Millersville University, where she studied the effect of the gut microbiota in starlings and worked as an assistant on a project studying the social behavior of wire-tailed manakins in Ecuador. She can be contacted at jlh498@cornell.edu 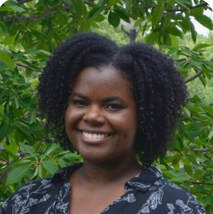 Monique is a PhD student in EEB and a Sloan Fellow. She came to Cornell from Penn State, where she studied the physiological drivers behind temperament for her Master's degree in Ecology. Monique is broadly interested in the proximate mechanisms behind social behavior, specifically communication systems. She intends to study how stress affects signaling, social structure, and life history traits in tree swallows. Monique is also interested in using art in science communication and outreach. She can be reached at: map469@cornell.edu. 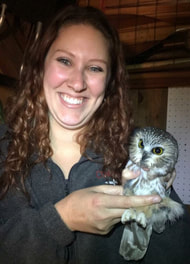 Brittany is our fearless lab manager! She has a degree in zoology, and before joining the lab Brittany spent several years working with mice in a developmental lab. Brittany is excited to be working with birds, and is currently leading sample analyses for a number of different projects.
Undergraduate Lab Members
Meera Shah 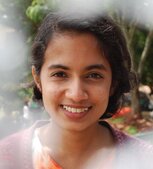 Meera is a junior from Nairobi, Kenya. She is a Biological Sciences major interested in zoology, and studied tree swallow behavior and physiology with the Ithaca-based tree swallow research team in 2017. She is currently conducting independent research on malaria prevalence in tree swallows.
Danica Lee 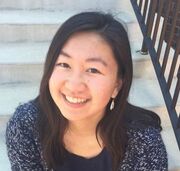 Danica is a biology major from New Jersey. She was a member of the 2017 Ithaca tree swallow research team. She is interested in how acute versus chronic stress can affect physiology and behavior. Danica previously participated in research on primate models of Parkinson's disease at Emory University. Her independent research in the lab focuses on characterizing the tree swallow microbiome.
Ann Li

Ann is a biology major from Spring, Texas. She enjoys birdwatching, and is particularly interested in the relationships between physiology and behavior. She spent the summer of 2017 in the interior of Alaska studying how tree swallows respond to environmental stressors, and the summer of 2018 in the Big Horn mountains of Wyoming, working with swallows there. 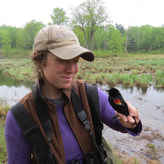 Laura was a visiting PhD student from the Department of Biological Sciences at Virginia Tech, based in the lab for three years. Her dissertation research explored the hormonal mechanisms underlying disease resistance and tolerance in red-winged blackbirds. She has also played a big role in the HormoneBase collaboration, a large-scale comparative project that is investigating how selection shapes hormone levels across vertebrate taxa. Learn more about Laura's research here. Laura is now the Assistant Director of the Office of Undergraduate Biology at Cornell!

Alyssa spent four years in the lab, working with tree swallows from New York to Alaska. She concentrated in neurobiology and behavior, and was a member of the first research team from the lab to travel to McCarthy, Alaska in the summer of 2016, where she braved bugs, bears, and "mooselings" to collect some exciting data on tree swallows breeding in this extreme environment. Back in Ithaca, she completed independent research on the predictors of fledging success and return rate, and an honors thesis on plumage-physiology relationships across swallow populations. Alyssa is now an education specialist at the Oklahoma Aquarium, a position that enables her to combine her passions for biology and science communication!

Avi joined the lab in 2015, during his sophomore year. Avi was interested in the role stress plays in senescence and how studying the response to stressors in tree swallows may provide clues to understanding aging in other organisms. He spent a year on the tree swallow summer research team, and then conducted independent work on how stressors affect telomere dynamics.
Garrett Levesque

Garrett was our only undergraduate lab member to have worked with both our vertebrate and invertebrate model species! He was a member of the Ithaca tree swallow research team for the past two summers, and pursued independent work on the role of predation on morphology and behavior in crickets (Gryllus bimaculatus), during the academic year. He plans to attend medical school after graduation.
Joe Colcombe

Joe joined the lab in 2016 as a member of the tree swallow field research team. In addition to field research Joe was active in the lab, helping to conduct hormone assays, and measuring the color of tree swallow feathers. He is currently spending a year teaching high school in New York City before attending medical school.

Jocelyn hails from Victoria, British Columbia. She joined the lab during her sophomore year and subsequently spent two seasons leading the tree swallow research crew. Jocelyn completed a wonderful honors thesis on the heritability of hormonal stress responses - which she recently submitted for publication as first author! She is currently attending vet school at Cornell.
Sophie Nicolich-Henkin

Sophie, who comes from Brooklyn, New York, began working in the lab as a freshman aggregating data for comparative analyses before acquiring skills in genotyping and genetic sexing.  She stayed in the lab for four years, completing honors research during her junior and senior years on the effect of perceived predator pressure on the morphology and physiology of extra-pair young. Sophie now attends medical school at Thomas Jefferson University.

Teresa was a long-time tree swallow researcher, and crew leader, who is particularly interested in the factors influencing natal dispersal. After completing her honors thesis she stayed on as the manager of the Winkler Lab. She is also an avid birder, a member of the Lab of Ornithology's Team Readhead, and helped to coordinate two natural history expeditions to Borneo as co- president of Cornell's Ivy Expeditions group. She is writing up two manuscripts on her undergraduate research, and is currently a graduate student (and NSF GRFP fellow) in the Winger Lab at the University of Michigan.